Plasmacytoid dendritic cells (pDCs) play a key role in antiviral responses by producing type-1 IFNs. However, recent studies showed that pDCs induce immune suppression and promote tumor growth in human ovarian cancer and myeloma. The molecular mechanisms underlying pDC acquisition of these properties are unknown. Here we show that human pDCs activated by CpG inhibited growth and induced apoptosis in myeloma cells via secreted IFN-α, but direct contact with myeloma cells converted pDCs into tumor-promoting cells by suppressing pDC IFN-α production. E-cadherin, expressed on both myeloma cells and pDCs, mediated these effects via a homophilic interaction — activation of E-cadherin signaling upregulated and activated TNFAIP3 to interact with TLR9, resulting in TLR9 ubiquitination and degradation, and inhibition of IFN-α production in pDCs. These findings were supported by an in vivo study in which pDC depletion induced tumor regression and better survival in the Vk*MYC myeloma mouse model. Furthermore, IFNAR1 expression level positively correlated to overall survival of patients with multiple myeloma (MM), and the IFN-α level in patient bone marrow was significantly lower than that in marrow of healthy individuals. This study reveals a novel mechanism underlying how MM tumors educate pDCs in their microenvironment and provides new targets for improving the treatment of MM.

MM cells, via direct contact, inhibit the production of IFN-α and other cytokines by pDCs. 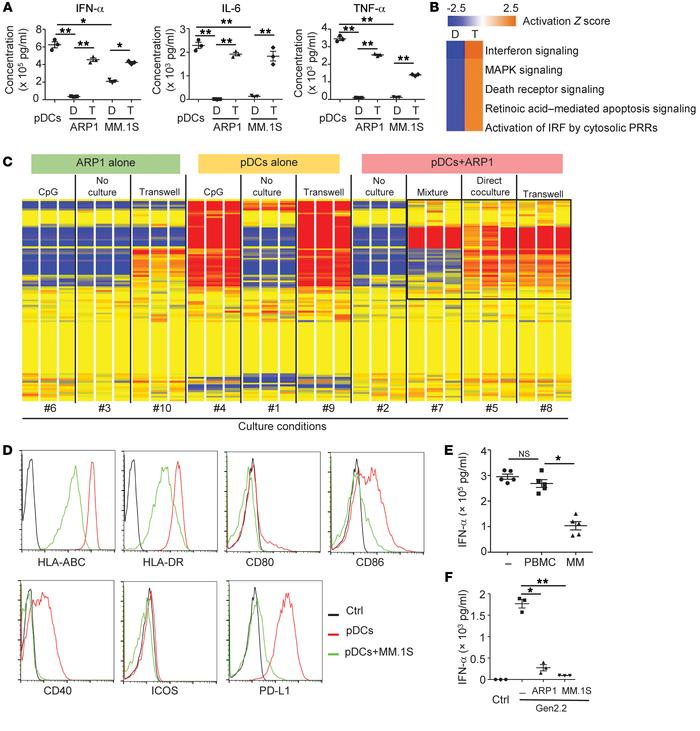 () Cytokine levels in the supernatants of pDCs cultured alone or in direct (D) or transwell (T) coculture with MM (ARP1 or MM.1S) cells with CpG for 16 hours (the same thereafter, unless otherwise stated). Global gene profiling of pDC culture alone or in coculture with MM (ARP1) cells, and data were analyzed by () IPA assay for the canonical pathways, or presented as () heatmaps to show the change in activation of IFN genes and IFN-inducible genes under various conditions. Gene profiling of ARP1 cells served as a control. () Expression of cell surface molecules on pDCs with or without direct coculture with MM (MM.1S) cells. () IFN-α secreted by pDCs (plus CpG) in direct coculture with primary MM cells freshly isolated from bone marrow of patients with MM or with PBMCs from healthy donors as a control. () Level of IFN-α secreted by the human pDC cell line Gen2.2, cultured alone or in a direct coculture with MM (ARP1 or MM.1S) cells, in the absence (control, Ctrl) or presence of CpG (Gen2.2). Experiments were performed 3 times in and –. Statistical significance was obtained by Student’s test, and Bonferroni’s corrected significance level was used when more than 2 groups were included in an analysis. * < 0.05, ** < 0.01.