Aberrant Tau inclusions in the locus coeruleus (LC) are the earliest detectable Alzheimer’s disease–like (AD-like) neuropathology in the human brain. However, why LC neurons are selectively vulnerable to developing early Tau pathology and degenerating later in disease and whether the LC might seed the stereotypical spread of Tau pathology to the rest of the brain remain unclear. Here, we show that 3,4-dihydroxyphenylglycolaldehyde, which is produced exclusively in noradrenergic neurons by monoamine oxidase A metabolism of norepinephrine, activated asparagine endopeptidase that cleaved Tau at residue N368 into aggregation- and propagation-prone forms, thus leading to LC degeneration and the spread of Tau pathology. Activation of asparagine endopeptidase–cleaved Tau aggregation in vitro and in intact cells was triggered by 3,4-dihydroxyphenylglycolaldehyde, resulting in LC neurotoxicity and propagation of pathology to the forebrain. Thus, our findings reveal that norepinephrine metabolism and Tau cleavage represent the specific molecular mechanism underlying the selective vulnerability of LC neurons in AD.

Viral vector–mediated Tau pathology in the LC and its propagation to the forebrain are blunted in AEP–/– mice. 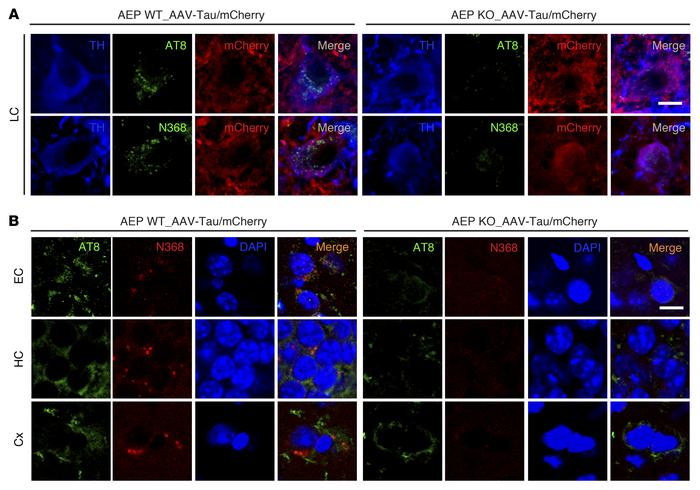 LC-specific AAV-PRSx8-Tau + AAV-PRSx8-mCherry were injected into the LC of AEP+/+ or AEP–/– mice, and pathology were assessed 3 months later. () Representative images of immunofluorescence staining of TH (blue), AT8 or N368 (green), and mCherry (red) in the LC. Scale bar: 20 μm. () Representative images of immunofluorescent staining of AT8 (green), N368 (red), and DAPI (blue) in the EC, HC, and Cx. Scale bar: 20 μm.