To elucidate the role of leptin in regulating neuroendocrine and metabolic function during an acute fast, six to eight healthy, lean men were studied under four separate conditions: a baseline fed state and three 72-hour fasting studies with administration of either placebo, low-dose recombinant-methionyl human leptin (r-metHuLeptin), or replacement-dose r-metHuLeptin designed to maintain serum leptin at levels similar to those in the fed state. Replacement-dose r-metHuLeptin administered during fasting prevents the starvation-induced changes in the hypothalamic-pituitary-gonadal axis and, in part, the hypothalamic-pituitary-thyroid axis and IGF-1 binding capacity in serum. Thus, in normal men, the fall in leptin with fasting may be both necessary and sufficient for the physiologic adaptations of these axes, which require leptin levels above a certain threshold for activation. In contrast to findings in mice, fasting-induced changes in the hypothalamic-pituitary-adrenal, renin-aldosterone, and growth hormone–IGF-1 axes as well as fuel utilization may be independent of leptin in humans. The role of leptin in normalizing several starvation-induced neuroendocrine changes may have important implications for the pathophysiology and treatment of eating disorders and obesity. 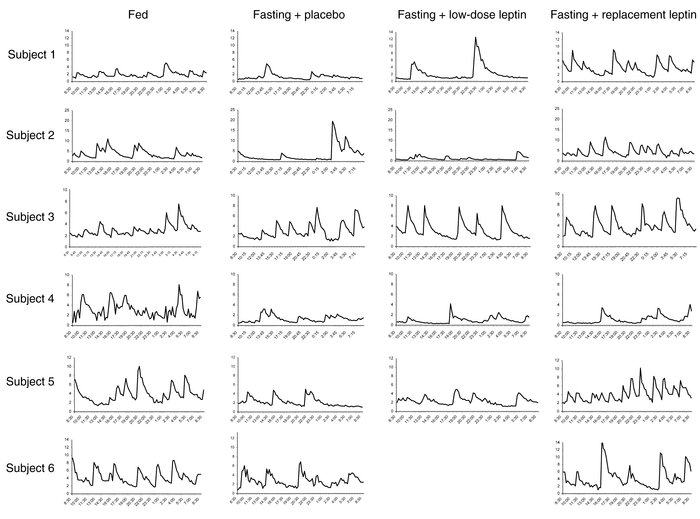