Macula densa (MD) cells express COX-2 and COX-2–derived PGs appear to signal the release of renin from the renal juxtaglomerular apparatus, especially during volume depletion. However, the synthetic machinery and identity of the specific prostanoid released from intact MD cells remains uncertain. In the present studies, a novel biosensor tool was engineered to directly determine whether MD cells release PGE2 in response to low luminal NaCl concentration ([NaCl]L). HEK293 cells were transfected with the Ca2+-coupled E-prostanoid receptor EP1 (HEK/EP1) and loaded with fura-2. HEK/EP1 cells produced a significant elevation in intracellular [Ca2+] ([Ca2+]i) by 29.6 ± 12.8 nM (n = 6) when positioned at the basolateral surface of isolated perfused MD cells and [NaCl]L was reduced from 150 mM to zero. HEK/EP1 [Ca2+]i responses were observed mainly in preparations from rabbits on a low-salt diet and were completely inhibited by either a selective COX-2 inhibitor or an EP1 antagonist, and also by 100 μM luminal furosemide. Also, 20-mM graduated reductions in [NaCl]L between 80 and 0 mM caused step-by-step increases in HEK/EP1 [Ca2+]i. Low-salt diet greatly increased the expression of both COX-2 and microsome-associated PGE synthase (mPGES) in the MD. These studies provide the first direct evidence that intact MD cells synthesize and release PGE2 during reduced luminal salt content and suggest that this response is important in the control of renin release and renal vascular resistance during salt deprivation. 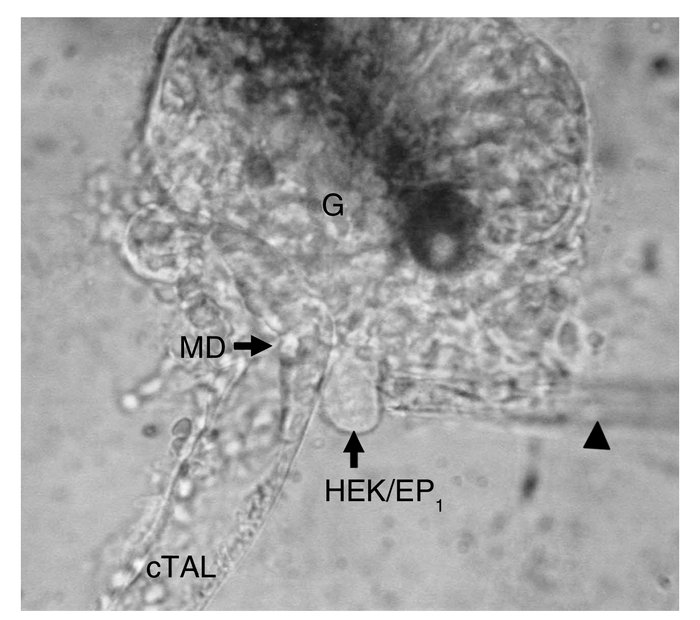 Photomicrograph of the biosensor technique for assessing PGE2 release at the basolateral membrane of MD cells. The glomerulus (G) has been dissected away from the MD plaque. A single HEK/EP1 cell is loaded with fura-2 and held with a pipette (arrowhead) positioned at the MD basolateral membrane surface while perfusing the intact cTAL.