The emergence of Lyme disease

The emergence of Lyme disease

Since its identification nearly 30 years ago, Lyme disease has continued to spread, and there have been increasing numbers of cases in the northeastern and north central US. The Lyme disease agent, Borrelia burgdorferi, causes infection by migration through tissues, adhesion to host cells, and evasion of immune clearance. Both innate and adaptive immune responses, especially macrophage- and antibody-mediated killing, are required for optimal control of the infection and spirochetal eradication. Ecological conditions favorable to the disease, and the challenge of prevention, predict that Lyme disease will be a continuing public health concern. 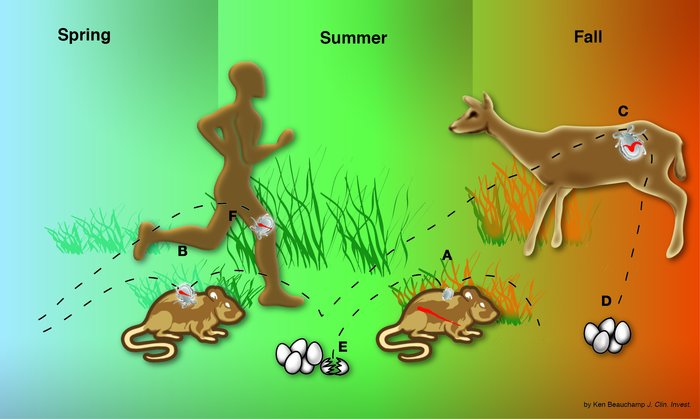 The enzootic cycle of infection in the northeastern US and intersection with human Lyme disease. ticks feed once during each of the three stages of their usual 2-year life cycle. Typically, larval ticks take one blood meal in the late summer (A), nymphs feed during the following late spring and early summer (B), and adults feed during the fall (C), after which the female tick lays eggs (D) that hatch the next summer (E). It is critical that the tick feeds on the same host species in both of its immature stages (larval and nymphal), because the life cycle of the spirochete (wavy red line) depends on horizontal transmission: in the early summer, from infected nymphs to certain rodents, particularly mice or chipmunks (B); and in the late summer, from infected rodents to larvae (A), which then molt to become infected nymphs that begin the cycle again in the following year. Therefore, spends much of its natural cycle in a dormant state in the midgut of the tick. During the summer months, after transmission to rodents, the spirochete must evade the immune response long enough to be transferred to feeding larval ticks. Although the tick may attach to humans at all three stages, it is primarily the tiny nymphal tick (∼1 mm) that transmits the infection (F). This stage of the tick life cycle has a peak period of questing in the weeks surrounding the summer solstice. Humans are an incidental host and are not involved at all in the life cycle of the spirochete.