Autoantibodies, autoimmune disease, and the birth of immune diagnostics

Autoantibodies, autoimmune disease, and the birth of immune diagnostics

The appearance of autoantibody to DNA followed sequentially by the disappearance of anti-DNA and appearance of DNA antigen in a patient with systemic lupus erythematosus demonstrated that autoantibodies participate in immune complex–mediated pathogenesis. Continuing studies showed that autoantibodies are also useful biomarkers in clinical diagnosis and important reagents for elucidating the structure and function of intracellular proteins in cell biology. Recently, autoantibodies to tumor-associated antigens have been identified in cancer, and these findings have expanded the field of cancer immunodiagnostics.

Identification of DNA antibodies in a patient with systemic lupus erythematosus. 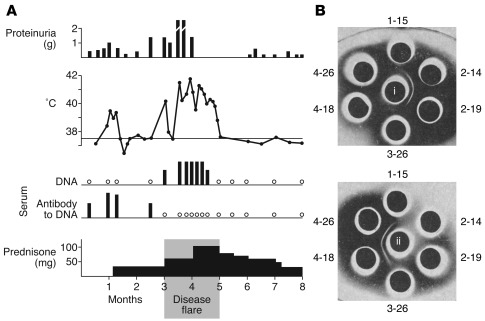 A patient with SLE experienced an acute exacerbation of illness with continuous daily fever of 40°C to 42°C for several weeks with increased proteinuria (). Sequential serum samples showed the presence of autoantibody to DNA, which was replaced by circulating DNA antigen during the disease flare. () Immunodiffusion studies demonstrating that pre-flare serum samples from 2-14 and 2-19 contained antibody to DNA (i, upper set of wells). In the lower set of wells, the central well was filled with serum from 2-19 (ii, containing autoantibody to DNA). Precipitin reactions were observed between this serum and those of 4-18 and 4-26. Chemical studies confirmed the presence of DNA in the latter two samples. Absence of either antibody to DNA or DNA antigen was observed at 3-26, a period of transition from antibody excess to antigen excess. The time line in shows a period of eight months in the patient’s history and is not calendar time. Adapted from ref. .