In multiple forms of cancer, constitutive activation of type I IFN signaling is a critical consequence of immune surveillance against cancer; however, PBMCs isolated from cancer patients exhibit depressed STAT1 phosphorylation in response to IFN-α, suggesting IFN signaling dysfunction. Here, we demonstrated in a coculture system that melanoma cells differentially impairs the IFN-α response in PBMCs and that the inhibitory potential of a particular melanoma cell correlates with expression. Comparison of gene transcription and array comparative genomic hybridization (aCGH) between melanoma cells from different patients indicated that suppression of IFN-α signaling correlates with an amplification of the locus within segment 12q22-24. Evaluation of NOS1 levels in melanomas and IFN responsiveness of purified PBMCs from patients indicated a negative correlation between NOS1 expression in melanomas and the responsiveness of PBMCs to IFN-α. Furthermore, in an explorative study, NOS1 expression in melanoma metastases was negatively associated with patient response to adoptive T cell therapy. This study provides a link between cancer cell phenotype and IFN signal dysfunction in circulating immune cells.

12q22-24 amplification is a genomic marker for L-mel and targets the gene. 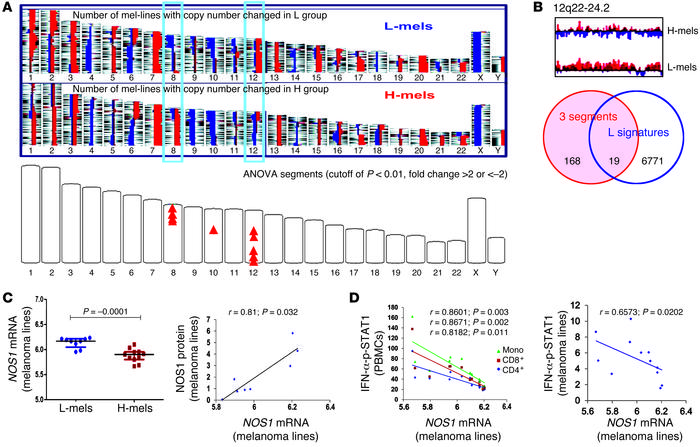 () Top: Chromosomal amplifications (red) and deletions (blue) in L-mels (above) and H-mels (below). Differences between L-mels and H-mels focused on chr8 and chr12 (blue squares). Bottom panel: Ten segments (red triangles) identified by ANOVA comparing L-mels with H-mels (cutoff of < 0.01, fold change of less than –2 or greater than 2). The segments are located in chr8, chr10, and chr12 (4, 1, and 5 segments, respectively). () Top: Copy number values in chr12q22-24 including the most significant segment and 2 other flanking segments in which the gene is located (cutoff of < 0.00001). Bottom: Venn diagram assembling 168 genes from 3 overlapping segments in chr12q22-24 with the 6,771 differentially expressed genes between L-mels and H-mels; 19 were in common between the two platforms, and their symbols are displayed. () Left: mRNA values in L-mels (blue) were higher than those in H-mels (red) ( = 0.001, Mann-Whitney test). Right: NOS1 protein and RNA correlation in 8 melanoma lines tested by intracellular FACS analysis. () Left: Correlation between mRNA values in melanoma cells ( axis) and IFN-α-p-STAT1 levels ( axis) in corresponding cocultured CD4+ and CD8+ T cells and monocytes. Right: Correlation between mRNA values in melanoma cells ( axis) and their IFN-α-p-STAT1 levels ( axis). All correlation analyses in this figure are based on Spearman’s correlation test.