Alterations in the apoptosis of immune cells have been associated with autoimmunity. Here, we have identified a homozygous missense mutation in the gene encoding the base excision repair enzyme Nei endonuclease VIII-like 3 () that abolished enzymatic activity in 3 siblings from a consanguineous family. The mutation was associated with fatal recurrent infections, severe autoimmunity, hypogammaglobulinemia, and impaired B cell function in these individuals. The same homozygous NEIL3 mutation was also identified in an asymptomatic individual who exhibited elevated levels of serum autoantibodies and defective peripheral B cell tolerance, but normal B cell function. Further analysis of the patients revealed an absence of LPS-responsive beige-like anchor (LRBA) protein expression, a known cause of immunodeficiency. We next examined the contribution of NEIL3 to the maintenance of self-tolerance in mice. Although mice displayed normal B cell function, they exhibited elevated serum levels of autoantibodies and developed nephritis following treatment with poly(I:C) to mimic microbial stimulation. In mice, splenic T and B cells as well as germinal center B cells from Peyer’s patches showed marked increases in apoptosis and cell death, indicating the potential release of self-antigens that favor autoimmunity. These findings demonstrate that deficiency in NEIL3 is associated with increased lymphocyte apoptosis, autoantibodies, and predisposition to autoimmunity.

Poly(I:C)-induced glomerulonephritis in the kidneys and elevated levels of autoantibodies in the sera of mice. 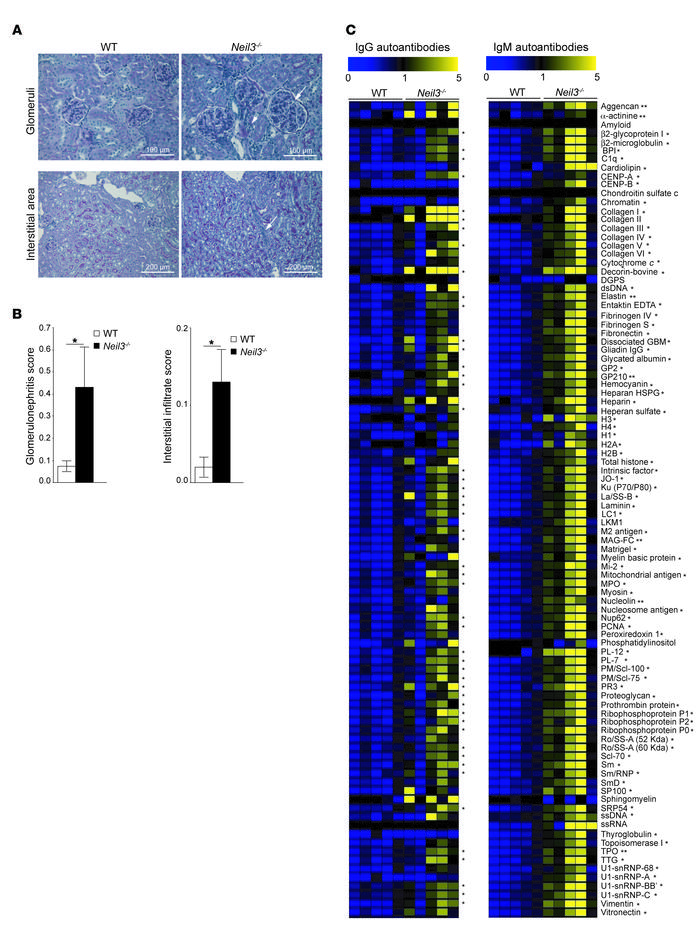 () Representative photomicrographs of kidney sections stained with PAS from mice and WT controls treated with poly(I:C). Kidney sections from mice show glomerulonephritis with periglomerular infiltrates (upper right panel, arrows) and interstitial infiltrate (lower right panel, arrow). Original magnification, ×40 (upper panels); ×20 (lower panels). Data are representative of 10 mice per group. () Histologic scores of glomerulonephritis and interstitial infiltrates, scored according to ref. . Columns and bars represent mean ± SEM of 10 mice per group. values were obtained by 2-tailed Student’s test. () Heat map display of IgM and IgG autoantibody reactivity against self-proteins in the sera of poly(I:C)-treated mice and WT controls ( = 5 mice per group). A value of 1 is equal to the mean of the poly(I:C)-treated WT controls. values were obtained by 2-tailed Student’s test. * < 0.05; ** < 0.01.