Rush desensitization (DS) is a widely used and effective clinical strategy for the rapid inhibition of IgE-mediated anaphylactic responses. However, the cellular targets and underlying mechanisms behind this process remain unclear. Recent studies have implicated mast cells (MCs) as the primary target cells for DS. Here, we developed a murine model of passive anaphylaxis with demonstrated MC involvement and an in vitro assay to evaluate the effect of DS on MCs. In contrast with previous reports, we determined that functional IgE remains on the cell surface of desensitized MCs following DS. Despite notable reductions in MC degranulation following DS, the high-affinity IgE receptor FcεRI was still capable of transducing signals in desensitized MCs. Additionally, we found that displacement of the actin cytoskeleton and its continued association with FcεRI impede the capacity of desensitized MCs to evoke the calcium response that is essential for MC degranulation. Together, these findings suggest that reduced degranulation responses in desensitized MCs arise from aberrant actin remodeling, providing insights that may lead to improvement of DS treatments for anaphylactic responses.

Signal transduction but no calcium mobilization during RDS. 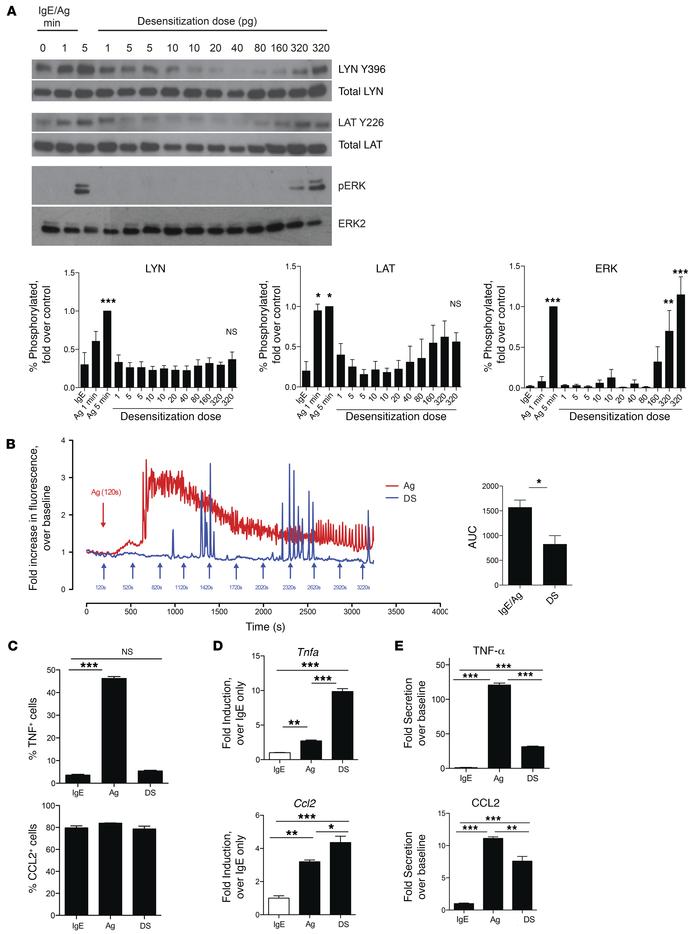 () 2 × 106 BMMCs per sample were sensitized with IgE before Ag challenge for 0, 1, or 5 minutes (first 3 lanes) or desensitized (lanes 4–14), with samples collected 1 minute after each dose was added. Samples were immunoblotted for phospho- and total LYN, LAT, and ERK. Blots are representative of at least 3 experiments. For densitometry, data were expressed as percentage of phosphorylated protein compared with total, then normalized to the positive control (5 minutes Ag). Data were analyzed via 1-way ANOVA with comparisons with IgE (Dunnett’s post-test). () BMMCs were adhered to Cell-Tak–coated (Corning) glass-bottomed plates for calcium imaging. Cells were stimulated with Ag or desensitized (DS), with successive doses added every 5 minutes (arrows). AUC analyses were averaged from 4–5 independent experiments. (–) 5 × 105 IgE-sensitized BMMCs per sample in triplicate were desensitized (DS), antigen challenged (Ag), or untreated (IgE). () BMMCs were incubated with brefeldin A for 8 hours before intracellular staining for FACS. () RNA was isolated from cell pellets for cDNA preparation. Quantitative RT-PCR was performed using primers for and and normalized to expression. () Cell supernatants after 24 hours were analyzed for CCL2 and TNF-α secretion. Data were expressed as fold over IgE-only controls. Data were analyzed via 1-way ANOVA ( and –) or Student’s test (). Data represent SEM. * < 0.05, ** < 0.01, *** < 0.001.