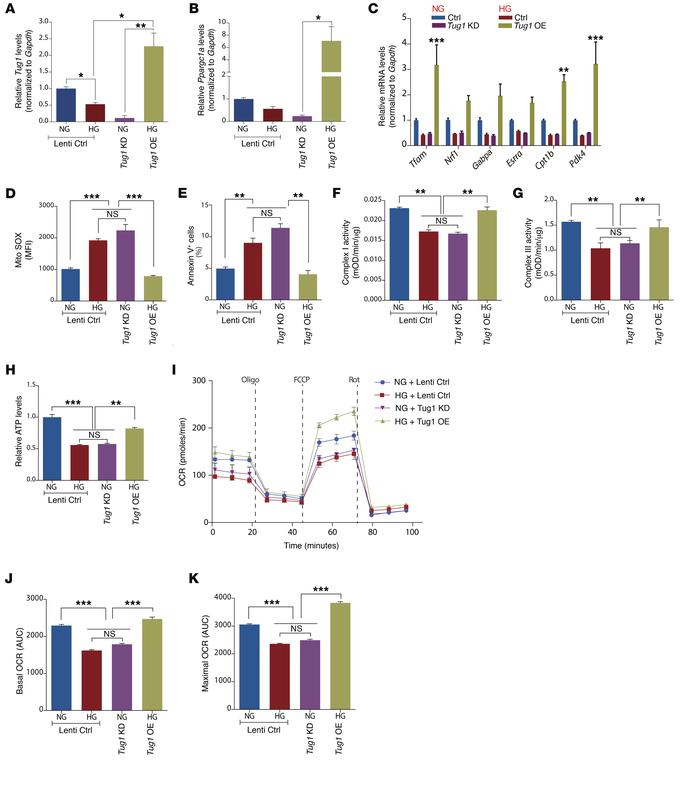 ( and ) qPCR analysis of and in control (Lenti ctrl), -KD, or -OE cultured podocytes under NG or HG conditions. () qPCR of selected PGC-1α direct targets in podocytes from . () Measurement of mitochondrial ROS in cultured podocytes, measured by flow cytometry as the MFI of MitoSOX. () Flow cytometric determination of the percentage of podocytes that underwent apoptosis as measured by annexin V–FITC+ cells. ( and ) Measurement of complex I and III activity in mitochondria isolated from cultured podocytes. () Relative ATP levels in podocytes, normalized to total protein content. (–) Mitochondrial OCR analysis of cultured podocytes using the Seahorse XF24 Bioanalyzer device. Oligomycin (2 μM), FCCP (2 μM), and rotenone (0.5 μM)/antimycin A (0.5 μM) were added at the times indicated by dashed lines. Basal and maximal respiratory rates of podocytes were determined by calculating the AUC. Cell culture experiments were repeated at least 3 times. * < 0.05, ** < 0.01, and *** < 0.001, by 1-way ANOVA, followed by Tukey’s post-hoc analysis. Data are expressed as the mean ± SEM. mOD, milli optical density.