It is well established that somatic genomic changes can influence phenotypes in cancer, but the role of adaptive changes in developmental disorders is less well understood. Here we have used next-generation sequencing approaches to identify de novo heterozygous mutations in sterile α motif domain–containing protein 9 (, located on chromosome 7q21.2) in 8 children with a multisystem disorder termed MIRAGE syndrome that is characterized by intrauterine growth restriction (IUGR) with gonadal, adrenal, and bone marrow failure, predisposition to infections, and high mortality. These mutations result in gain of function of the growth repressor product SAMD9. Progressive loss of mutated through the development of monosomy 7 (–7), deletions of 7q (7q–), and secondary somatic loss-of-function (nonsense and frameshift) mutations in rescued the growth-restricting effects of mutant SAMD9 proteins in bone marrow and was associated with increased length of survival. However, 2 patients with –7 and 7q– developed myelodysplastic syndrome, most likely due to haploinsufficiency of related 7q21.2 genes. Taken together, these findings provide strong evidence that progressive somatic changes can occur in specific tissues and can subsequently modify disease phenotype and influence survival. Such tissue-specific adaptability may be a more common mechanism modifying the expression of human genetic conditions than is currently recognized.

Mutations in SAMD9 identified in 8 patients with IUGR and a multisystem disorder. 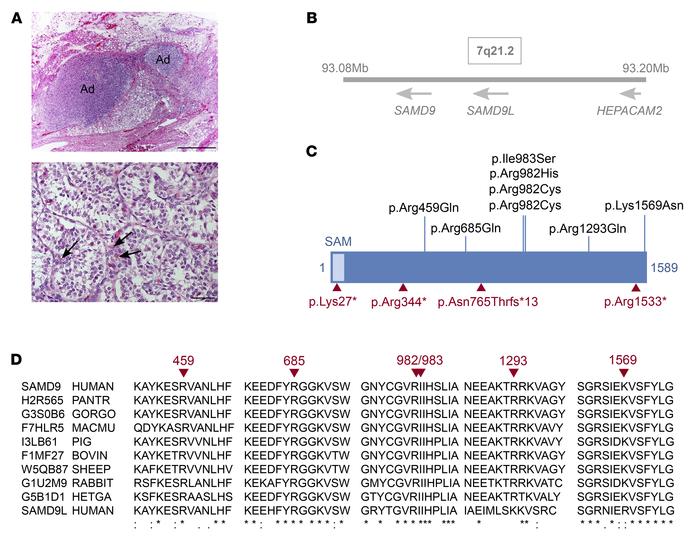