The underlying molecular mechanisms of age-related hearing loss (ARHL) in humans and many strains of mice have not been fully characterized. This common age-related disorder is assumed to be closely associated with oxidative stress. Here, we demonstrate that mTORC1 signaling is highly and specifically activated in the cochlear neurosensory epithelium (NSE) in aging mice, and rapamycin injection prevents ARHL. To further examine the specific role of mTORC1 signaling in ARHL, we generated murine models with NSE-specific deletions of Raptor or Tsc1, regulators of mTORC1 signaling. Raptor-cKO mice developed hearing loss considerably more slowly than WT littermates. Conversely, Tsc1 loss led to the early-onset death of cochlear hair cells and consequently accelerated hearing loss. Tsc1-cKO cochleae showed features of oxidative stress and impaired antioxidant defenses. Treatment with rapamycin and the antioxidant N-acetylcysteine rescued Tsc1-cKO hair cells from injury in vivo. In addition, we identified the peroxisome as the initial signaling organelle involved in the regulation of mTORC1 signaling in cochlear hair cells. In summary, our findings identify overactive mTORC1 signaling as one of the critical causes of ARHL and suggest that reduction of mTORC1 activity in cochlear hair cells may be a potential strategy to prevent ARHL. 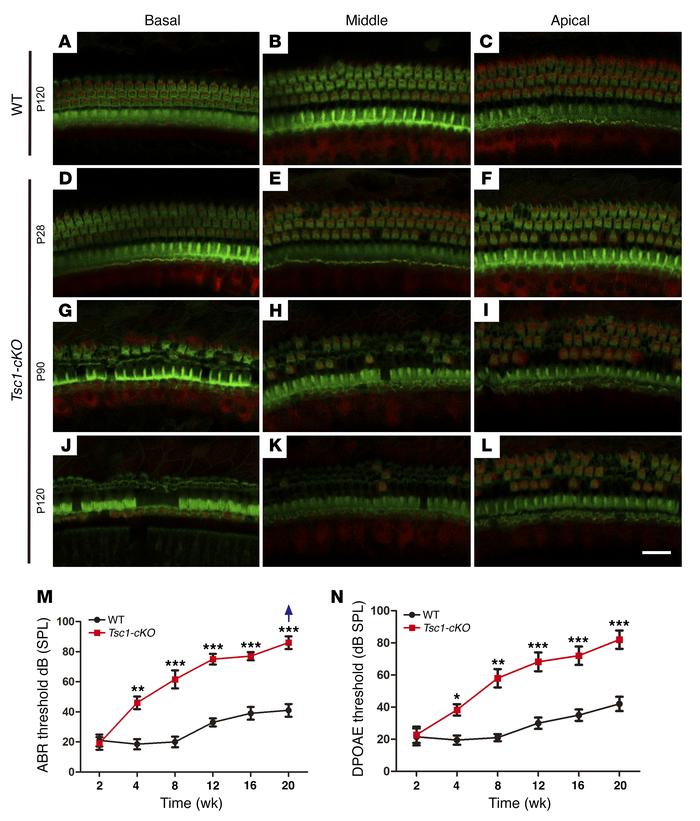 Confocal images of cochlear whole mounts labeled with a Myo7A antibody (red) and counterstained with phalloidin to label filamentous actin (green) are shown. (–) Representative images from the basal, middle, and apical turns of the organ of Corti in WT mice at P120. (–) Representative images of the organ of Corti from 3 turns of the cochleae in mice at P28 (–), P90 (–), and P120 (–). OHCs began to degenerate by P28. Severe degeneration was evident at P90. By P120, only a few OHCs and partial IHCs remained in the middle and apical turns of the cochleae. = 5 for each group. ( and ) Graphs illustrate age-dependent threshold changes in WT and mice. Age-related click ABR thresholds () and age-related DPOAE thresholds () in WT and mice showed progressive hearing loss. The group sizes were as follows: 2 and 4 weeks: = 15 for each group; 8, 12, 16, and 20 weeks: = 5 for each group. The arrow indicates that even at the highest SPL test level (90 dB SPL), several mice showed no response. Data are shown as the mean ± SD. * < 0.05, ** < 0.01, *** < 0.001, by 2-tailed Student’s test. Scale bar: 20 μm.